With World Cup catching my interest, I overlooked about the SUKMA games..until I read that it was officially closed..hehe..

Glad to know that Terengganu became the overall champ, but the medal collections had decreased...was it bcos the 2008 event was held in Terengganu itself?

Better prepare for 2012 games in Pahang from now.

mmm...Its been a while since I managed to get any souvenirs from SUKMA games :-)

The biennial games, which was first held in 1986, was participated by about 7,000 athletes from 15 contingents, including an invited team, Brunei.

At the ceremony, Najib also presented the Prime Minister's Trophy to the Terengganu team which emerged as the overall champion with a medal tally of 47 gold, 30 silver and 43 bronze medals.

KEMAMAN, June 20 (Bernama) -- Terengganu has announced a state holiday and increased its cash incentives for emerging overall champion in the 13th SUKMA that ended in Melaka yesterday.

Terengganu Menteri Besar Datuk Ahmad Said who made the announcement today said the holiday on (June 27) was an incentive to athletes who had worked very hard and a present to the people of the state for helping the state to emerge as the overall champion for the second consecutive edition.

[Why can't he extend d public holiday on Monday 28th n for all Terengganu born, then I can join as well..hehehe..]

In d meantime on World Cup :

"Kaka was given a second yellow card by French referee Stephane Lannoy when the Ivory Coast’s Kader Keita was not looking where he was going and collided heavily with the Brazil midfielder. Kaka merely held his ground for the inevitable contact, and the incident in no way warranted a free kick, let alone a yellow card." 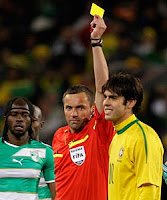