My passport had expired early February. Needed to renew it so I surfed the net before going to Immigration office at Wangsa Maju, KL as my previous one was done in Kuala Terengganu. 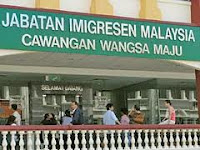 Found out that I could get it done in less than two hours, really? But I'd better be an early bird..just in case.

So by 8.11am today (according to the parking ticket..hehe) the car was parked less than 50m away from the office. I needed to get my photos first ~ bit bz to have it taken before :)..it took just a few minutes ~ before we went next door.

Filled up the forms before we were given ticket numbers, mine showed 14 people ahead of me, waiting to be served.. 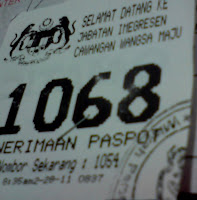 But to my surprise, I was called in about 15 minutes to hand over the documents to be processed and less than 20 minutes later, my number was called again to make the payment.

The next process took the "longest" ~ issuance of the new passport, and mine was issued about 45 minutes after payment was made.

(My old and new ones)

so I guess it's true about this logo I found :

(One hour after payment is made)

Thumbs up to the staffs of Immigration Office for the fast service...but what I like most was that they were friendly, from the 1st person that we met i.e the security man to the lady who handed over my new passport. "Service with a smile"..keep it up!

But I wonder...how do they stand hearing the fast number calling announcements all day long? I was there for less than 2 hours and was ready to bolt..hehehe..
:-)

I personally have seen lots of improvement as far as immigration is concerned.. From 1 week to get our passports to 1 day and now 1 hour.. bravo to them. Other government agencies should study them..

I WAS surprised, so much difference from years ago...not phobia anymore..hehe

As far as i know they always give fast and good friendly service.
I wonder how about the other gov departments?

Got the same friendly treatment in my previous application in K.Terengganu, but few times heard differently with the KL office, so I was pleasantly surprised, hehe..

and I believe the rest of the govt. agencies pun now the same.

Yours I'm sure is up to date right? but which one?.hehe..

passport dah berkulat?...now u can be in d new bzness - mushrooms, I love it, goreng dgn tepung n telur.

What does "that statements" mean??? Me don't understand :D