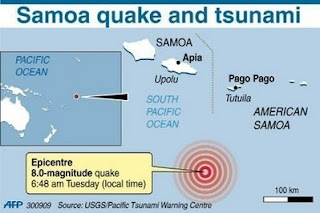 Scores of people have been reported killed in the Samoan islands after a powerful earthquake triggered a tsunami in the Pacific ocean.

The extent of the damage is still unclear but 22 people are confirmed dead in American Samoa and 14 in neighbouring Samoa, with unconfirmed reports of scores more missing and feared dead following the 8.3 magnitude earthquake and subsequent tsunami.

Michael Sala, the homeland security director in American Samoa, said the number dead "could go much higher" and that "it could take a week or so before we know the full extent".

The quake hit between the islands of Samoa and American Samoa just before dawn local time on Tuesday.

Waves up to 5m high swept several kilometres inland, entire villages and towns were wiped out, and power was knocked out in many areas, according to witnesses.

APIA, Samoa – A massive tsunami unleashed by a powerful earthquake flattened Samoan villages and swept cars and people out to sea, killing at least 99 and leaving dozens missing Wednesday. The death toll was expected to rise.

Survivors fled the fast-churning water for higher ground on the South Pacific islands and remained huddled there hours after the quake, with a magnitude between 8.0 and 8.3, struck around dawn Tuesday.

Four tsunami waves 15 to 20 feet (4 to 6 meters) high roared ashore on American Samoa, reaching up to a mile (1.5 kilometers) inland, Mike Reynolds, superintendent of the National Park of American Samoa, was quoted as saying by a parks service spokeswoman.

Less than 24 hours later, another strong underwater earthquake rocked western Indonesia on Wednesday, briefly triggering a tsunami alert for countries along the Indian Ocean and sending panicked residents out of their houses. The quake toppled buildings, cut power and triggered a landslide on Sumatra island, and at least 13 people were reported killed.

The Samoan capital, Apia, was virtually deserted by afternoon, with schools and businesses closed. Hours after the waves struck, sirens rang out with another tsunami alert and panicked residents headed for higher ground again, although there was no indication of a new quake.

In American Samoa's capital of Pago Pago, the streets and fields were filled with ocean debris, mud, overturned cars and several boats as a massive cleanup effort continued into the night. Several buildings in the city — just a few feet above sea level — were flattened. Several areas were expected to be without power for up to a month.
Posted by Cheqna at 22:48