By : By Minderjeet Kaur and Phuah Ken Lin
(NST Online)


KUALA LUMPUR: Thousands of Malaysians enjoyed an hour of quiet darkness last night, switching off their lights and other electrical appliances for Earth Hour nationwide from 8.30pm to 9.30pm.

In the heart of the capital, famous skyscrapers such as the Petronas Twin Towers, KL Tower, office towers, hotels and banking institutions went "missing" from the skyline. 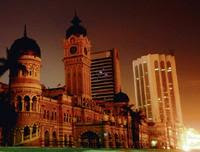 Motorists along the usually bustling Jalan Sultan Ismail were also in for a surprise to see the entire street in total darkness except for some glitter from street lights.

At Jalan Bukit Bintang, hundreds of youths with some of wearing blinking lights on their clothes or handbags, sat along the road to enjoy the breeze.

The usual glitter of lights was also missing from Jalan Raja Laut and Jalan Ampang.

He reminded youths of the importance of saving energy.

In Penang, thousands switched off their lights.

From the heart of the city, across the channel to the mainland, it was lights off as a symbolic gesture to combat global warming.

The lack of lights on the bridge meant motorists had to slow down. Despite this, traffic was smooth.

At the Esplanade, the facade lighting of majestic colonial-era buildings for city hall and town hall were also switched off.

The initiative of the World Wide Fund for Nature also received overwhelming response from hoteliers' associations and local authorities.

From the pristine beaches of Batu Feringghi to the famous promenade of Gurney Drive, 37 hotels took part in the campaign by switching off lights in common areas. 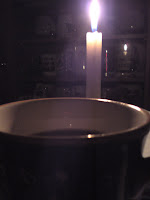 
its quite fun to hear neighbours reminding each other and looking forward to the "event", thou I overheard one "mak cik" worried that TNB (National Electricity Board) was going to "cut-off" the electricity supply...luckily someone corrected her! ... :-)

I guess the Earth Hour messages in media worked..he he..

Yellow potatoes - pierce with fork several times, bake in microwave oven - HIGH - for 8 to 10 mins or until tender.

Split and fluff up the potatoes, add a bit of butter.

1 small can of sweet corn,
1 boiled egg - cut into small cubes
1 japanese cucumber-sliced or cubed,
cherry tomatoes-cut into half,
half cup of tuna flakes,
3 to 4 tablespoon of mayonaise,
salt and pepper to taste,

mix all in a bowl, and serve over the potatoes. 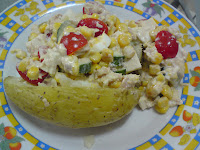 at the same time, I made water melon juice - 3 cups of sliced melons, 1 cup of water and half cup of syrup, blended it, add a bit of ice and wa laa.... 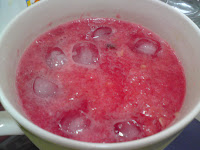 but somehow, we tasted additional "flavour" ... the blender was used to blend chilies before, so our juice was a bit "hot"!..haahaahaa....
Posted by Cheqna at 14:12 No comments:

Got this video in my mail box from my sister.. so cute...

Mark you calendar this Saturday, 28 March 09!

It's the day millions of people around the world turn off non-essential lights for 1 hour, from 8.30pm to 9.30pm (local time), to send a powerful global message that we care enough about climate change to take action.

Earth Hour is a fun and easy way for the people of Malaysia to be heard. Show you care about our planet by joining in.

KUALA LUMPUR: There was a momentary hush as the disabled boy placed the skateboard under his right arm and hoisted himself onto the stage to meet the Yang di-Pertuan Agong yesterday.

The crowd at Dataran Merdeka could not help but be amazed as Muhammad Haziq Samrat, 14, who was born with deformed legs, "rose" beyond his dreams to meet his king who was almost on his knees.

As Haziq received the Maulidur Rasul Award to rapturous cheers and applause, all he could manage was a smile as the king spoke to him for a few minutes. 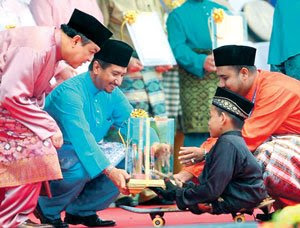 Haziq was one of six recipients of the annual award which carries a RM22,000 cash bonus and a certificate.

In a meeting with the press later, all the first former at SMK Sri Damansara 1 could muster as he was asked about his meeting with the king was: "I'm happy". Haziq's shy demeanour, however, belied a tenacity to live life to the fullest, whatever the circumstances.

He was born with deformed legs, a disability that forced him to rely on a skateboard as his means of moving around. But what Haziq lacks physically, he has more than made up with sheer grit. He is a class goalkeeper, a member of the Islamic Society and a boy scout.

"I just look at things with an open mind and accept what has happened. I have to be strong," the youngest of seven children said when asked how he coped with his disability.


(I cried when I saw this boy on TV yesterday...may he be blessed with good life, be a successful person and may Allah SWT guide him to the right path...ameen)
Posted by Cheqna at 19:20 No comments: 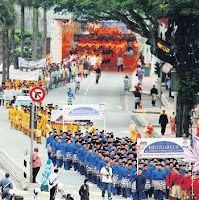 Yang di-Pertuan Agong Tuanku Mizan Zainal Abidin has called on the Muslims to appreciate the life history of Prophet Muhammad who had placed much emphasis on unity and solidarity to achieve excellence.

His Majesty said efforts to unite the community was an ongoing process in line with the demands and challenges of the 21st century.

"As such, all policies that are formulated to turn the country into a developed nation in future will not be achieved if the aspects of unity and solidarity are taken lightly by everyone.

"When a section of the population becomes greedy and places self-interest above others, ignoring noble values in pursuing material wealth, then various calamities will strike bringing destruction to the people and drawing the wrath of Allah," he said.

The King said the appreciation of Islam, which had been translated through the history of its glorious era, had shown that the ummah had once united on the axis of truth.

During the Islamic glory, there was harmony, stability and consensus, he said.

His Majesty said Islam made it compulsory to protect and ensure equal rights for all strata of the society regardless whether they were Muslims or non-Muslims.

He also presented the Maulidur Rasul Awards to six recipients at the function.

The sole recipient of the Maulidur Rasul Premier Award 2009 was Professor Dr Sidek Baba from the Educational Institute of the International Islamic University (IIU), who also received RM50,000 in cash and a plaque.

All the five received RM22,000 in cash and a plaque each.

The celebration today started with a procession comprising about 100,000 people who recited praises on the Prophet along the way. Those taking part in the procession were public and private sector employees, representatives from the non-governmental organisations, schools, public institutions of higher learning and training institutes, and representatives from the mosques.